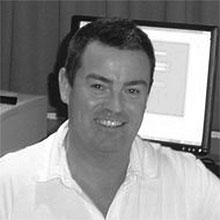 A Glasgow based Scottish voice over artist with an eloquent style that is highly adaptable.

He has a flair for many Scottish dialects and accents and he can perform in a variety of styles including: relaxed, warm, friendly, approachable, informative, trustworthy, authoritative or even hard sell.

His voice over and broadcasting career began in 1999 at The Travel Channel where he was a continuity announcer. He was selected to be a member of the original team of announcers (and ‘the Scottish voice’) at the Biography Channel when it launched in the UK in 2000. Also in 2000, Derek took on a News reading role at Radio Forth in Edinburgh and he remained there until joining Living TV as a continuity Announcer in 2003.

He’s also voiced many corporate and e-Learning projects for us.